Smart cities approach does not only emphasize the implementations of new technologies in a city but also highlights the importance of using new technologies for enabling citizens’ engagement in urban planning processes. In that regard, ICTs play a vital role in (i) supporting citizens to report their complaints related to the public spaces (i.e. via smartphone apps and social media) and  (ii) providing information to citizens when and where problems occur in the city (i.e. open data platforms and dashboards). Public space complaints indicate problems related to the condition of streets and facilities in public spaces. 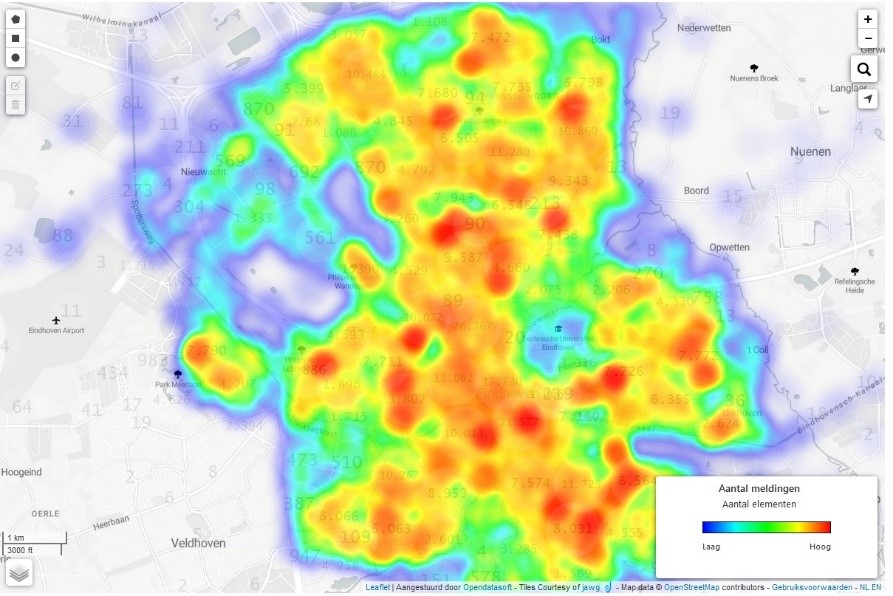 The collection of data on complaints results in large amounts of data which can be used for understanding the current status and making predictions for future complaints. However, in the literature and in the practice, this topic has not been investigated in-depth yet since such data on civic complaints are new. Nevertheless, Customer Journey Optimization solutions have emerged in other fields like Process and Data Mining that they can offer proper solutions for predicting the next interactions of customers (here citizens) based on the previous context of their journeys (here the sequences of their public space complaints).

In this master project, the aim is three-fold:

In this master project, the data of more than 350,000 public citizen complaints from Eindhoven will be used (collected between 2013 and 2020). An example visualization of the data can be seen in Figure 1.

The analysis and prediction of civic complaints can contribute to better organization of cities and increase the quality of life for citizens.